In the wake of the recent announcement about MLB’s recognition of the Negro leagues, we prepared the following brief introduction to our work here.

The Seamheads Negro Leagues Database is an in-progress statistical encyclopedia covering Black professional baseball players, teams, and leagues during the era of segregation. Our work was specifically commended by Commissioner of Baseball Rob Manfred when he announced that the Negro leagues would be recognized as major leagues. Bryant Gumbel of HBO’s Real Sports pronounced our database to be “the most authoritative record of Negro league statistics ever assembled.”

In addition to games between Black major league teams (including postseason series and All-Star games), we also offer statistics for exhibition games between Black teams and white major and minor league teams. And, as Black American players often played in Latin American leagues, and Black players from Latin America played in the Negro leagues in the U.S., we cover Cuban and Mexican baseball of the era, and plan to cover Puerto Rico, the Dominican Republic, and Venezuela in the future.

Currently we have at least some data for every season in the United States from 1886 through 1948, as well as more than 20 Cuban seasons from 1899/1900 through 1927/28 and several Mexican seasons in the 1940s. We are always uncovering and adding new seasons, leagues, games, and other information to our database, so it is worth checking back frequently to see what’s new.

Our database (with the exception of the Mexican League statistics) is built from the game level up, using box scores, newspaper articles, and scoresheets. Currently we do not make use of published year-end statistics or standings—everything is verified from contemporary accounts of individual games.

Another core principle of the database is that both sides of every game are represented. Consequently many white major and minor leaguers are present in the database, so it’s possible to see how Babe Ruth or Christy Mathewson fared against Black or Cuban competition. (White major and minor leaguers might also appear because they played in the Cuban or Mexican leagues.)

SOME HINTS FOR UNDERSTANDING THE DATABASE

Postseason series and All-Star games are presented as separate “leagues,” as are exhibition games against white major and minor leaguers.

A blank space does not indicate a zero; it means insufficient or missing data. In general, we do not have enough data for batters’ strikeouts and caught stealing in Negro league games; there are exceptions for some postseason series and All-Star games. However, both categories are available for many Cuban League seasons, and batters’ strikeouts were recorded in Mexican League statistics.

The default display for player pages shows all stints combined for any given year; that is, it shows one line for each season of a player’s career. If a player appeared for more than one team, or his team appeared in the playoffs or World Series, the default display adds his statistics together. (This means, incidentally, that zeros will sometimes appear for columns that are actually blank.) If you click the “Show Individual Stints” button it will separate out a player’s stints within a given season.

The per-162-game figures given after career totals on every player page adjust for missing and incomplete statistics. We use 162 games to enable cross-era comparisons to major league players.

UPDATE 1/18/2021 Also keep in mind that at its core the database covers games between teams we’ve defined as Black major league teams—that is, teams roughly comparable in quality to the teams in organized Negro leagues, 1920-1948. It does not (yet) cover games against white semipro and amateur teams, lower-level white minor league teams, college teams, and teams we’ve defined as Black minor league teams. Especially prior to 1920 and the advent of organized Negro leagues such games took up large parts of Black teams’ schedules—so the games counted here generally represent only a small part of each team’s season.

We’ve added newly audited and expanded statistics for the 1926 Negro National League, including fielding statistics, complete pitching statistics, batters’ hit by pitch, and a handful of new games and corrections to the record.

While I don’t think that counting stats are, by themselves, a particularly good measure of the quality of Negro league ballplayers, it’s worth noting that this audit has produced a new single-season record for home runs by a player in games against Negro league opponents: 32 by Mule Suttles of the St. Louis Stars.

The Stars played in Stars Park, which was built up against a trolley car barn that cut into left field, making it a great park for right-handed power hitters. Here’s a photo of Stars catcher Henry “Flick” Williams, with a good view of the park: 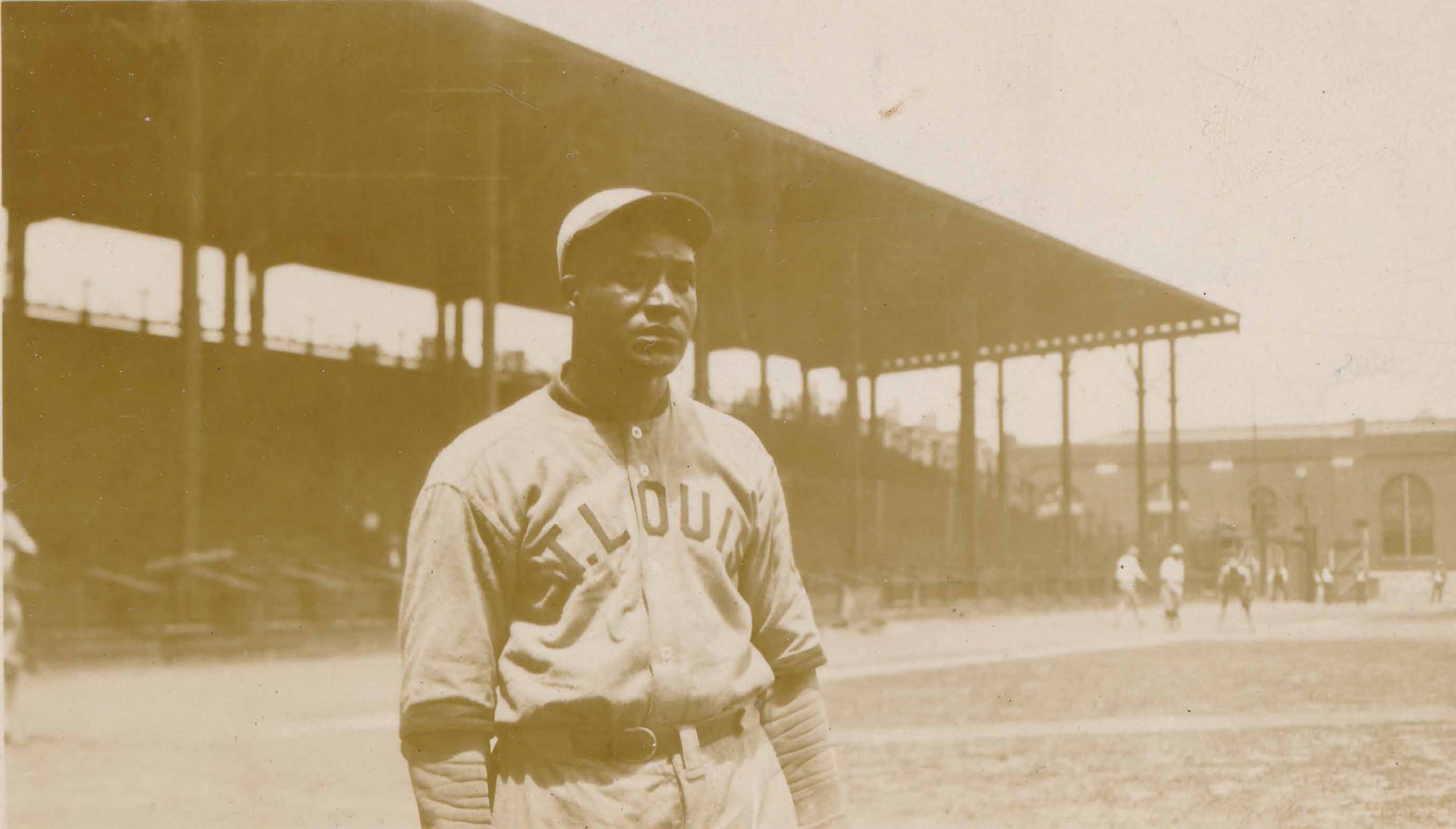 And in fact, Suttles hit 26 home runs in Stars Park (one of them inside the park) and only 6 on the road. Those numbers are a bit deceiving, though, as the Stars’ schedule was extremely lopsided, with most of their NNL games played at home. Of Suttles’s 89 games, 65 were in Stars Park:

At these rates a balanced home/road schedule would give Suttles 18 homers at home, 11 on the road.

A few other statistical highlights from this update, all from the St. Louis Stars:

–Suttles also sets single-season Negro league records for triples (19) and extra base hits (79), as well as for slugging percentage with 200 plate appearances or more (.877).
–The NNL leader in HBP was Stars catcher Mitchell Murray with 15, which also sets a single-season Negro league record.
—Cool Papa Bell stole 36 bases, which is the second-highest single-season Negro league total we’ve recorded (the highest is Bell’s 49 in 1929).
–St. Louis pitcher Slap Hensley set a less enviable record by allowing 20 home runs, the most allowed by a Negro league pitcher in a single season (so far). To be fair, he was a workhorse in an extreme hitters’ park who led the league in most counting stats for pitchers, including wins, games pitched, games started, innings pitched, hits allowed, runs & earned runs allowed, walks, and strikeouts.

Turning to fielding, here are the NNL fielders with the most Runs Saved Above Average for each position (excluding pitchers):

The best defensive team, by Runs Saved Per 1000 Innings, was the Kansas City Monarchs; the worst was (surprisingly) the St. Louis Stars, though the last-place Dayton Marcos were close. The Stars did give up a ton of hits (their opponents batted .309 for the season) but I’m actually wondering if the metric is not fully accounting for park effects here. 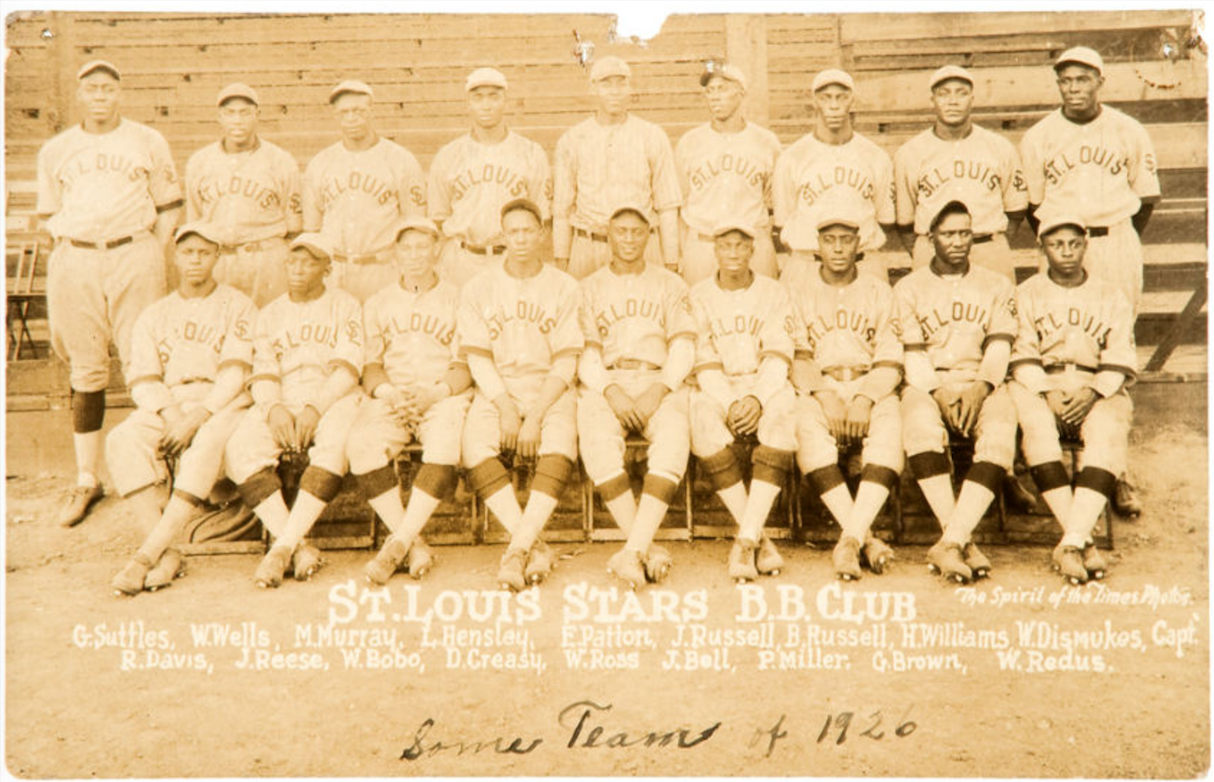 The 1926 St. Louis Stars didn’t win the pennant, but they did put up some big numbers.